There is no other city in India which is as old and as colorful and spiritual as Varanasi. The charm of this town is immortal; legend says the city was founded 5000 years ago by Lord Shiva on the banks of River Ganges. Banaras or presently Varanasi in Uttar Pradesh is one of the oldest continuously inhabited cities in the world and the oldest in India. It is a holy place for Hindus; it is believed that the city stands on Lord Shiva’s weapon, the Trishool or the Trident and The Ganges is the river of salvation and is supposed to offer Moksha or liberation from the cycle of birth and death.

Sarnath, the place where Lord Buddha delivered his first lecture after he attained enlightenment is also close to Varanasi. The city is also the birthplace of seventh Jain Tirthankar Suparshv Nath Ji. Owing to these,  it is a holy city for the Jains and Buddhists alike. It is a perfect way in which the two worlds, the material, and the spiritual world meet and co-exist.

It is due to the spirituality of this ancient town that several people come here to seek spiritual enlightenment while others come for the salvation of their sins. The rich ancient culture and heritage of this city make it a must visit destination in India for people from across India and aboard.

Things to do in Varanasi:

Visit the Ghats and take a dip in the Holy Ganges:

Owing to its religious past, Varanasi is a city of Ghats and Temples, the ancient town has nearly 100s ghats. The oldest and the most famous being the Dashashwamedha Ghat, Manikarnika Ghat, and Harishchandra Ghat. One can take a dip in the ghats or a boat ride in the evening or morning for Rs 250 – Rs 500 per boat of max four people. 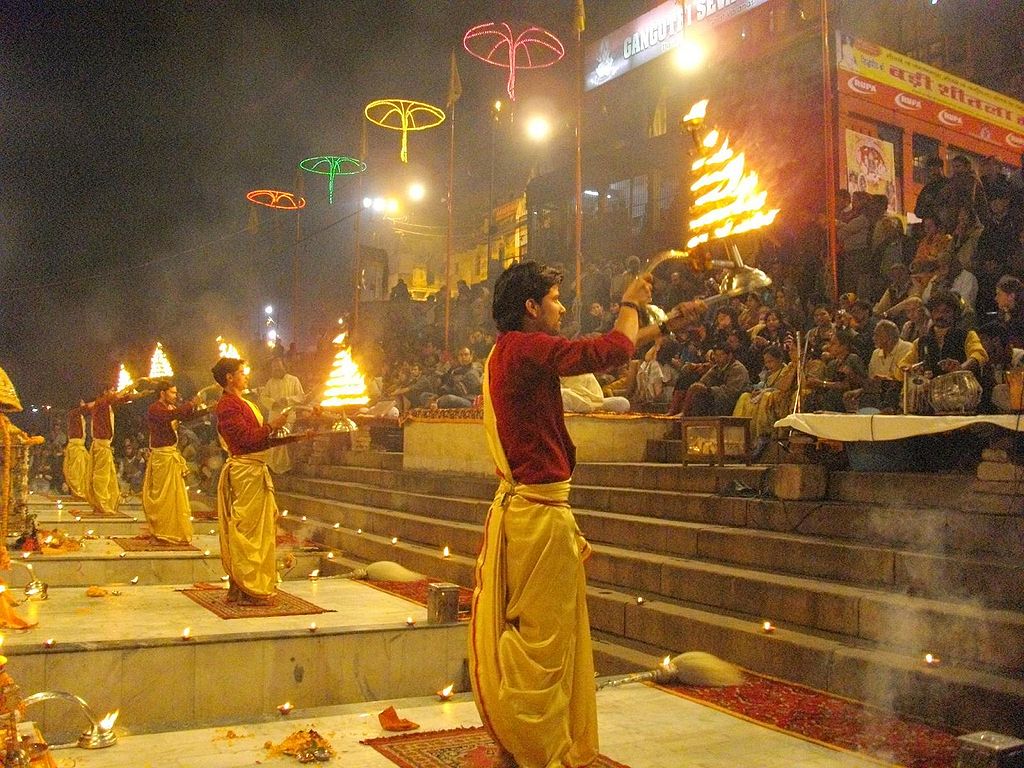 Evening Aarti by the Ghats:

It is a spiritual lifetime experience to watch the evening Aarti from the Dasawamedh Ghat. Hundreds of diyas are lit up on large massive brass lamps and used for the evening worship. The lights shimmer and shine, some on the ghats and some floating on leaves on the River Ganges.

The most popular temple here is the Kashi Vishwanath Temple built in 1780. The Durga Temple built during the 18th century and there is a belief that the statue of Goddess Durga here was made by Goddess herself. Also, you can visit Sarnath which is 38 km away from Varanasi, where Gautama Buddha first taught about the concept of Dharma. The soul of this divine city is its culture, arts, and literature, some of the finest Indian writers like Kabir, Ravidas, Tulsidas who had written the Ram Charit Manas had spent the better halves of their lives in Varanasi.

You can visit the Vishwanath Lane, Thateri Bazaar, Chowk, and Godowilia which are the main shopping areas. The Banarasi saris, shawls, carpets with intricate zari work are an inevitable part of the tradition here; they are one of the finest and best weaves of the country. Gorgeous, vibrant mix of gold silver and copper threads used in the Banarasi saris are sought after Indian bridal and traditional wear. Also, do not forget to gulp down the famous Banarasi paan.

Winters from October and March is the best time to visit Varanasi.

How to reach Varanasi:

Varanasi has an airport of its own and connected to all the main Indian cities. International flights can be boarded from Delhi which is at 816 km from Varanasi. The city is well connected by trains and buses.

Take a Trip this Weekend to the World’s Only Home of Greater One Horned Rhino – Kaziranga National Park, Assam

Worlds’s Only Village with No Doors and Locks – Shani Signapur, Maharashtra