Never to miss these 3 Spots on a trip to Agra: Taj Mahal, Agra Fort & Fatehpur Sikri

Not a piece of architecture, as other buildings are, but the proud passions of an emperor’s love wrought in living stones.

Once being mentioned as Agraban, a forest near Mathura now exists as the Land of Palaces. A land home  to the most illustrious palace’s one could ever see. It’s not just the architecture of these palaces which makes Agra, a renowned travel city of India, but also the history of each palace. Doesn’t the beauty of an existence of a building lies in its history? Not completely, but the past stories brings life in these monuments. The walls make you imagine the thousands of skilled artisans who strenuously with their tools worked day and night. And how upon completion of these eminent palace’s, it became the barrier of historical events and people from all over the world came to admire it every day.

Its glory was at the peak during the reign of Akbar, Jehangir and Shah Jahan. It was during that time that architecture of Mughals was erected on the banks of Yamuna. Agra, when seen anywhere in a travel magazine is mostly accompanied by a pleasing image of Taj Mahal. One of the majestic man-made creations is now a wonder of the world.

It is from November to March. The climate favors the location as it requires 3-4 hours to properly visit one palace and sit in the royal gardens with friends and family, play games and make the visit count. All this cannot be possible in the strenuous heat of summer or when it rains whole day long during the rainy season.

How to reach Agra:

Delhi to Agra Tourism – The most favorable way to reach Agra from Delhi is either by road or train. It takes around 2-3 hours by train and 3-4 hours by road. Take the expressway to Agra from Delhi; a taxi, bus or your own vehicle. By railways, the quickest way possible is Shatabdi Express which takes 2 hours, leaving Delhi at 6am and reach by 8am to Agra and the return is also fixed at 8:30pm which reaches by 10:30pm at Delhi.

An epitome of Love by shah Jahan when himself saw, quoted “In this world, this edifice has been made; To display thereby the creator’s glory.”

Here we have some lesser known facts about Taj Mahal history without which Taj Mahal tour will be incomplete:

Highlights: One of the seven Wonders of the World; A UNESCO World Heritage Site.

Fee: Rs.750 for Foreign Tourist, Rs.510 for SAARC & BIMSTEC Countries, Rs.40 for Indian Citizens and no fee for children under the age of 15 years (Domestic or Foreigner) 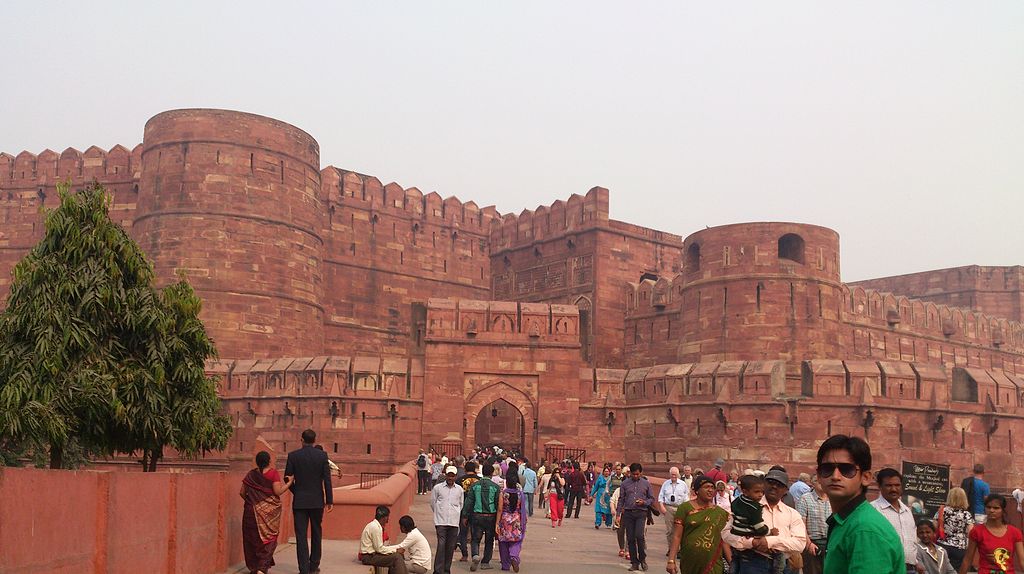 The beauty of Agra is not just limited to Taj Mahal. Largely overshadowed by the Taj Mahal, the Agra Fort is another finest Mughal Forts of India.

Primarily being built as a military structure was later transformed into a palace by Shah Jahan for his love of tombs. Only later was Shah Jahan imprisoned by his own son in a part of this fort known as  ‘Musammam Burj’ along with his daughter.

Jahangiri Mahal – Primarily the palace of the Mughal Emperor Jahangir luxuriates with an impressive courtyard which was built in red sandstone and the main hall consists of a whispering gallery engraved with carved miniature brackets.

Khas Mahal – The two palace’s by the same name were built for Shah Jahan’s two daughters. It has a river on one side and pleasure gardens on the other. In front of this complex is a large tank with 5 fountains.

Muthamman Burj – It was inlaid with precious stones which were an ornamental cover for the drains, which was used for taking water out of the palace. It was once a self-contained building in itself, with separate courtyards and imperial baths. There is another small marble paved room containing a waterfall and a channel to serve as a cooler resting place in summer.

Shish Mahal – It was so named due to the excessive use of the mirrors in its walls and ceilings set in the plaster. The palace has 2 chambers which had a marble tank with fountains and arrangements for hot and cold water. There were series of candle niches along with the inlet niches for water, where the candles were kept to cast their reflection on the falling water casting a lovely effect. Glass mosaic work also covers the beautiful portraits on the walls. 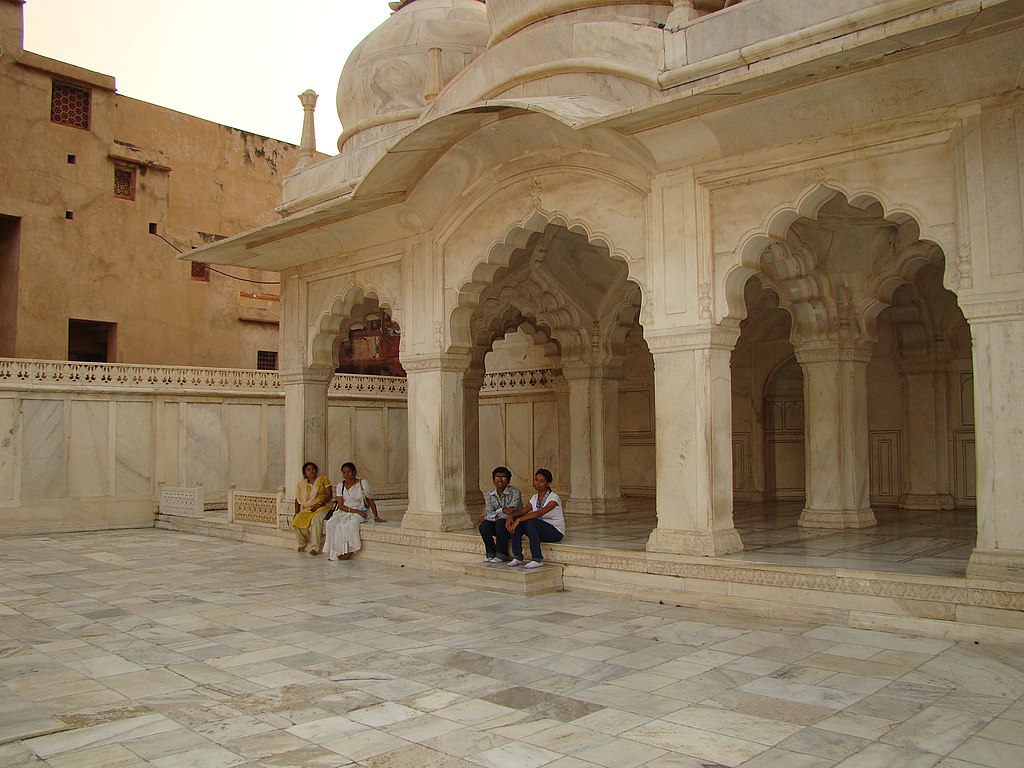 Diwan-i-Khas – It was built for the purpose of a private audience hall. It was generally used by emperors for meeting in private to discuss important affairs of state.

Macchi Bhavan – It consists of a spacious courtyard and there is some belief that the emperor used the balcony to sit and watch the sight of the court below.

Diwan-i-Aam – It was constructed for Shah Jahan to address the public and the nobility and it also served as a hall of public. It is built also in the form of an assembly hall which makes the architects believe so. There also used to exist a peacock throne which was later captured by Persians.

Moti Masjid – This section is not available to the visitors but has been restricted by military forces. It is a beauty indeed with arched entrances and dome crowns in prayer rooms. It appears to be made from bricks from the outside but instead it is made of beautiful marble.

Till now it might seem that this exquisite place has made its mark in the history due to the one who built it. But this fort is known for its architect and the intellect in its making. It took over 8 years to build this fort and each sector is unique in its own way.

Timings: Sunrise-Sunset (All days of the week)

Fee: Rs.550 for Foreign Tourist, Rs.40 for Indian Tourist and none for children below age of 15 years

The Agra tour has just taken its pace. Next in line, we have Fatehpur Sikri. A city which is so authentic and its reasons for being sublime is varied from its history to its existence, as one of the most visited places in India, till date. The name was formerly known as Fatehabad which is derived from a Persian word Fatah meaning victory.

Songs of its history can still be heard from the people who have lived there long enough. It dates back to the reign of Akbar. Blessed with almost all joys in the world, once was without an heir to the throne. A firm believer indeed, set on a foot journey to Ajmer to seek blessings of a Sufi saint, Sheikh Salim Chisti. After a year, Akbar did have an heir whom he named Salim after the saint. The entirety of his joy was built in the form of the city which we now call as Fatehpur Sikri. It then began to serve as an additional capital at Agra where all the important administrative, financial, as well as military reforms of the Mughal Era, was conceptualized and implemented. Therefore, it came to be known as the political city of Emperor Akbar.

Wonder what is so impressive about this city?

It’s the aura. It makes you travel back in time to the era of Mughal rule. The architecture at every end will make you want to capture it as a memory. Due to its history, it celebrates its own festival in the remembrance of Salim Chisti which is celebrated every year for 10 days. This festival is well supported with folk music, craft fairs , poetry competitions and other cultural activities which make people never lose touch of the old times.

Buland Darwaza – The journey starts from the majestic gate, Buland Darwaza which is just an Urdu word for magnificent gate. It is the largest gateway in the world of height 54 meters. The craftsmanship can be seen in its magnanimity. It is made from red sandstones and carved with marbles and on the main gateways in Persian, It is written “The world is a bridge Passover it, but build no houses upon it. He who hopes for a day may hope for eternity; but the world endures but an hour. Spend it in prayer for the rest is unseen.” 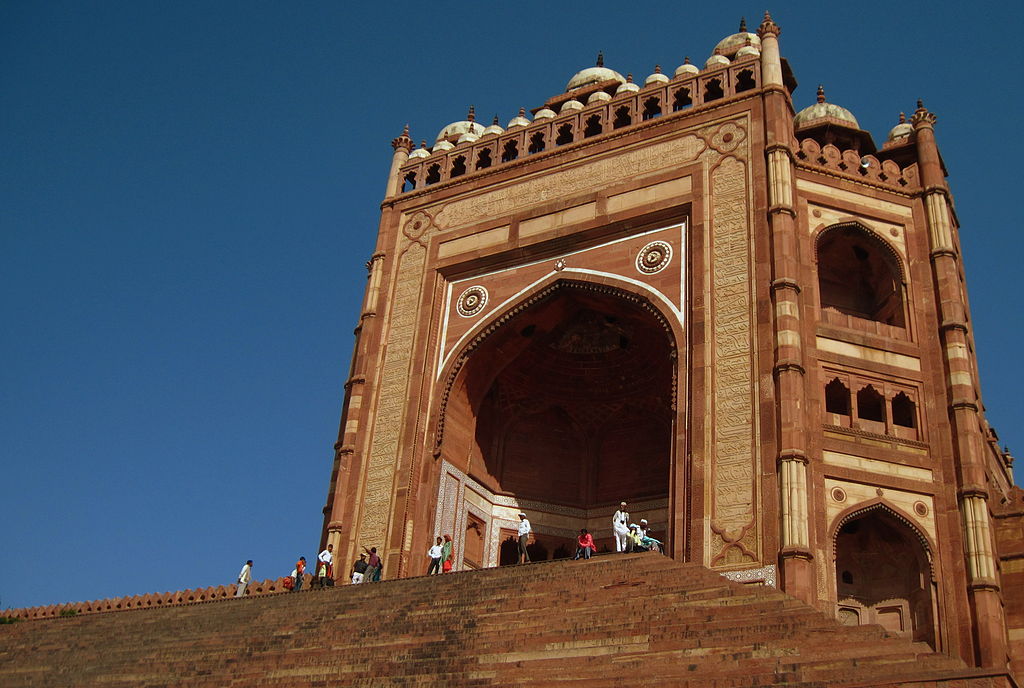 Diwan-i-Aam – The first courtyard was Diwan-i-aam. It has a courtyard which Akbar used to celebrate major festivals with public. There the common man also put forth their problems and petitions to the king. The path that leads to Diwan-i-Aam has a stone ring embedded in it which is believed to be the spot where condemned were crushed to death by an elephant.

Diwan-i-Khas – Next comes the Diwan-i-Khas for private meetings with emperors. Its central tower is known as the Lotus Throne. It is known for its unique stones at the center hall. Akbar was always believed to be a worshipper of palaces and his love for them was reflected from these exquisite jewels. His royalty had no limit on the price.

Panchmahal – Later comes the most beautiful structure of the whole complex- Panchmahal. The five-story with a single kiosk at the top. Each story was stepped back from the previous one. It is believed that Akbar built this for his wives where he sat at the top and enjoyed panoramic views of beautiful evenings, full-moon nights and cool breeze. It also has a pool in front of the building called as Anoop Talav. 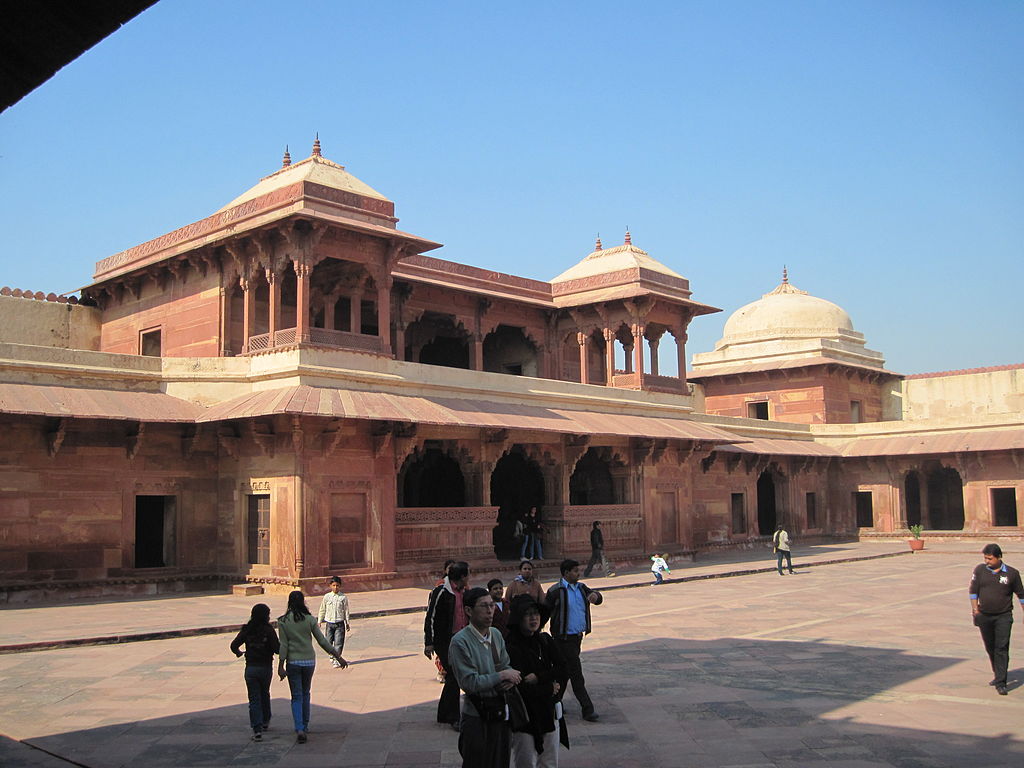 Tomb of Sheikh Salim Chisti – This is another most important buildings in the complex which carved with marbles and is one of the finest examples of artistic stone carving mastery. It has intricately carved marble screens called as ‘Jaalis’ from all sides and no doubt belongs to the Sufi Saint. A gift in return of a blessing.

Fee: Rs.510 for Foreign Visitor, Rs.40 for Indian visitor and citizens of SAARC and BIMSTEC countries

Agra Tourism is the most talked about subject when it comes to traveling to India. One just cannot ignore these 3 places on a visit to Agra. The majestic structures of these palaces create an image of how the “World of Mughal Raj” was years back. It all appears to be just like another fairy tale. It is only upon visiting them that one can realize how peaceful it is to walk in the royal gardens in the evening. Every place has a different story to tell because it is Agra- holder of ‘Taj Mahal; Epitome of Love ’.