Take a Trip this Weekend to the World’s Only Home of Greater One Horned Rhino – Kaziranga National Park, Assam

We all have grown up being fans of the blockbuster Steven Spielberg series Jurassic Park, if you wish to experience the mammoth sized creatures which would remind you of the Jurassic era then you must take a trip to this UNESCO’s World Heritage Site – Kaziranga National Park in Assam. This Park is home to the endangered One-horned rhinoceros that is found only in the Indian subcontinent. India and Nepal are proud hosts to this one-horned wonder with India accounting for 2/3rd of the population of this rare species in Kaziranga alone. Recently visited by the Royal couple Kate and Prince William, this Park is one of the most sought after wildlife holiday destinations in India hosting visitors from around the globe. Almost 430 square kilometers in area, the park is embedded with superbly tall elephant, grass meadows, lagoons, dense forests and is dotted with more than 2200 Indian one-horned rhinoceroses as per the latest survey.

One of the most amusing images of the Indian one-horned rhino is with that of an egret perched on the rhino back. The Park is home to an enormous number of other species accompanying the rhinos like elephants, wild water buffalo, Leopard, Sloth Bear, Python, monitor lizard & plenty of deer’s. The tiger population here has seen a steady increase, the reason why Kaziranga was declared as Tiger Reserve in 2006 as well. It is also recognized as a major Bird habitat and you should look out for the white-fronted goose, ferruginous duck, Baer’s pochard duck, greater adjutant, black-necked stork, and Asian Openbill stork which especially fly down from Central Asia during winters.

Not just the wildlife, the landscape and beauty of Kaziranga are adorned by silence broken by sounds of the wild and human-sized elephant grass, huge expanses of marshlands with the mighty Brahmaputra river meandering in the heart as the soul this thriving forest. 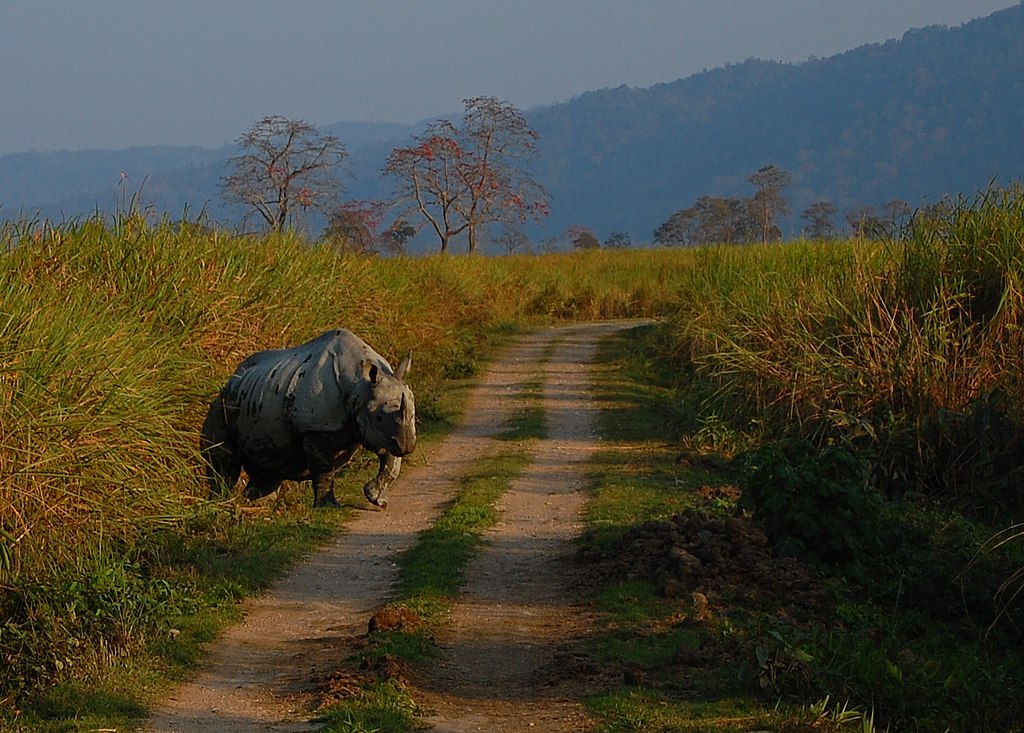 The most in demand and sought after way to explore the jungle and get a chance to watch the wildlife in its habitat is on the Elephant back by the Elephant Safari, which takes you up close to the Rhinos. The more thrilling way to move around the jungle is definitely the other most common and easily available one, the jeep safari. The Jeep safaris go out both in the mornings and in the evenings and it’s a fun ride in itself. Although be aware it’s strictly a no-no to de-board in the jungle. 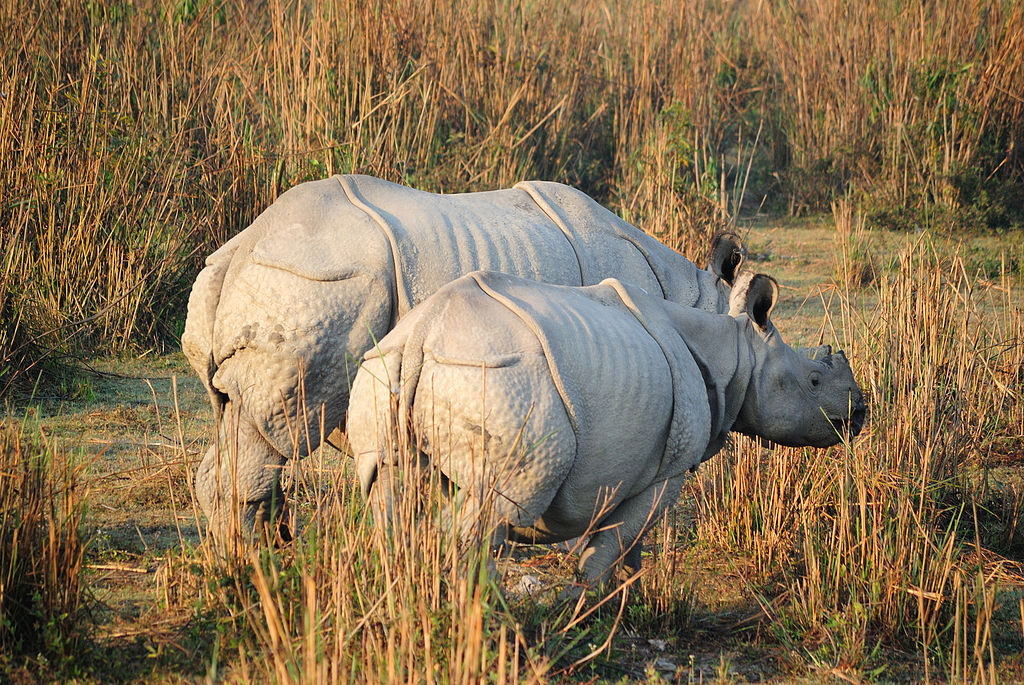 Winters and Spring season from November to April is the best time to visit Kaziranga as the weather is cool and dry and spotting the rhinos laying in the winter sun across the burnt off grasslands is easier.
Summers are marked by dry and windy weather and the animals can be spotted around the water bodies quenching their thirst.
The months from May till October sees the Monsoon here and this is when the region receives heavy rain and as it is at the risk of river floods from the Brahmaputra, the park remains closed during these months.

Hotels in and around Kaziranga National Park:

Visiting a National park and not staying inside one? Not a good idea. Fulfill your dream of waking up in the wild. Stay at one of the many resorts and hotels in close vicinity to the National Park. Due to increasing demand and popularity of this destination over time quite a few luxury resorts have sprouted up as well. Some of the best options to choose from for your stay are Jupuri Ghar, Iora Resort, Wild Grass Lodge, Bonhabi Resort, Infinity Kaziranga Wilderness or Kaziranga Resort.

How to Reach Kaziranga National Park:

Kaziranga National Park is located in the North-eastern state of Assam in India and is very well connected by road to all nearby major cities.
To get there by air, Guwahati Airport is the nearest airport located at 217 km. The other airport is in Jorhat at 97 km from Kaziranga.
Both the airports are well connected via roads and have regular and frequent Assam Transport as well as private buses both luxury and budgeted types. Buses to other important cities of Assam like Tezpur and upper regions of Assam are also connected by bus services and there are car services available for hire.
By Train, the most prominent Railway station is in Guwahati again, although the nearest one is in Furkating at a distance of 75 km.